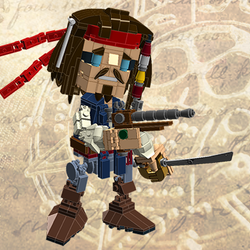 "They call me... Jack."  - Samurai Jack.
Samurai Jack is the creation of the genius Genndy Tartakovsky.
It is the story of a legendary samurai warrior so insurmountable that his foe, Aku, had no other choice than to send him thousands of years into the future, hoping that, in that time, he would gain enough strength that he could defeat the samurai.
Although the world changes much under the rule of Aku and his minions are still no match for Jack's noble spirit, pure heart, and mystic blade, as he quests to find his way back to the past and ultimately defeat the evil that is Aku.
Samurai Jack is one of those media experiences that proves the true power of animation, story, and art to provoke wonder, amazement, laughter, and awesome fight scenes.  It is simultaneously a worthy homage and a ground-breathtakingly creative, unmatched series.
This project attempts to recreate the struggle between Samurai Jack the evil shape-shifter Aku.
If you, like us, are a fan of Jack, please show your support with a vote for this project.
Do you know Jack? if you do, please support and pass this on to other fans of Samurai Jack.