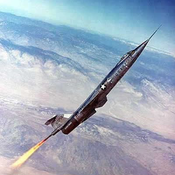 As a first stage to Earth orbit nothing is faster or more efficient than the Cormorant!
Designed to assist in the missions to the moon Europa and beyond, the Cormorant-LV was born. Using its exotic materials and fuel and refined aerodynamics, it carries supplies and astronauts to the Near Earth Orbital Launch Station (NEO-LS) from a normal runway. Carrying a small transport shuttle up into Earth's upper atmosphere, it can accelerate to hypersonic speeds using its combination turbojet/airfed rockets and launch its cargo into space. The Cormorant can also achieve low Earth orbit to retrieve anything from space trash and satellites to the Puffin shuttle with its extendable arm and cargo clamps.
The Puffin shuttle is no glider. With three large rockets fed off hyper-dense fuel, it can lift itself into orbit off the back of the Cormorant-LV to transport astronauts, experiments, and supplies to NEO-LS. The Puffin can return to Earth and land on a runway, or it can be retrieved by the Cormorant-LV in space for a safe landing.
Don't forget the diligent ground crew. Their careful preparation and monitoring are what make every mission possible and safe. They use their slow and powerful Ant Tow Tractor to carefully move the Cormorant from the hangar to the runway.
Set Details:
• 1821 Pieces
• Three Vehicles: Cormorant Launch Vehicle, Puffin Shuttle, and Ant Tow Tractor
• Six minifigures making up the Ground Crew, Pilots, and Astronauts
• Moveable elements on Cormorant: Cabin door, Elevons, Retrieval arm, Maintenance hatch, Air intake ramp, Air breaks and Retractable landing gear.
• Moveable elements on Puffin: Opening hatch, Air breaks, and Retractable landing gear.
• Details: Radar in Cormorant-LV nose, Detailed control consoles on both ships, and piping and oxidizer tank in shuttle.
Design Choices:
The design is a homage to the X-planes of NASA and the goal of easier space travel. I used real world design cues of spaceplanes and other high altitude high speed aircraft to make the Cormorant Launch Vehicle feel realistic in scale and shape while also maintaining some rationality as far as piece count and size. Though this is not a NASA set, I felt it was realistic to base the color scheme on known thermal insulation techniques. The Puffin Shuttle was a fun improvisation that I designed when I was coming up with the mission plan for the aircraft. I would like to state clearly this is not in any way a military aircraft. It is a Civilian aircraft for transport and research purposes only.
Lego has long inspired me with their company message and their products. I hope that this project will inspire someone else if it gains enough altitude. Thank you.