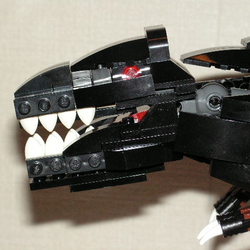 This dinosaur is widely known as Brontosaurus (meaning "thunder lizard"), however the correct scientific name is Apatosaurus (meaning "deceptive lizard"). This is because when Othniel C. Marsh discovered the first two fossils in 1877 and 1879, he did not at first realize that they were adult and juvenile examples of the same species, and hence gave the two fossils different names. Subsequently, it has been realized, that both of these fossils were after all from the same species, so only one name should be used: Apatosaurus is the correct name, because it is was the first name used.