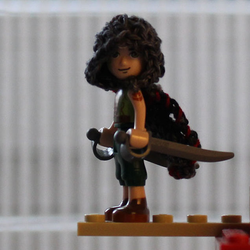 My LEGO project draws heavily from the Prague Astronomical clock. It can be said that the clock is a medieval spaceship of sorts, as it symbolizes the human craving for knowledge and the fascination, with which we look up to the stars.

The Prague Astronomical clock was constructed in the 15th century. Its astrolabe displays various times, astronomical cycles, current sun position, moon position both above and below the horizon and its position relative to the Sun. The Caledar plate then reads the current month and day, and it also shows the fixed holidays in Christian calendar.
Above the clock, two windows can be found. These open on the hour to reveal a presentation of statues of the Apostles. Above them there is an animated golden rooster which crows every noon. Lining the sides of the clock, 8 animated alegorical statues can be found.
The Astronomical clock is listed as a UNESCO world cultural heritage site.

The LEGO Astronomical clock has the same main parts: a static calendar plate at the bottom, an astrolabe with a rotating face in the middle and windows with a presentation of statues at the top. The movement is done by rotating two cogs at the side of the clock struucture.
Unlike the actual one, the LEGO Astronomical clock can stand on its own, with cobblestone paving and several tourists in front of it. The back side of the structure is transparent, so the internal mechanism can be seen in action.

The clock can work both as a standalone display piece and as a part of a larger LEGO city. It will stand proud next to modular buildings, as well as become the dominant of any town square.

The clock faces and figurines on the current model are just mockups, made on an inkjet printer. The professional printed pieces would look much better!