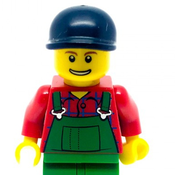 Here we have my interpretation of a Victorian walled kitchen garden. Combining my love of LEGO with being a fruit and vegetable grower, I wanted to create an educational fun scene that depicts tradition, history and lots of playability.

Starting from the front row working left to right, the following vegetables are in crop rotation order;
Roots, Alliums & Potatoes (RAP) First Row
Brassicas Second Row
Tomatoes Third Row Left Side
Legumes Third Row Right Side
Pumpkin, Sweetcorn & Courgettes Fourth Row
The walls have the following trained apple trees growing on them;
A cut flower bed compliments the kitchen garden
There is also a grand glasshouse with dessert grapes growing inside. Pipe-work underneath the floor grates supply heat.
There are 4 employed gardeners working in the garden
I've included a night scene where the gardeners are out checking for slugs under lamplight. Other ideas I would like to include when I find time are scenes throughout the seasons.
I would openly appreciate any feedback to help improve my idea and I thank you in advance for any support received.