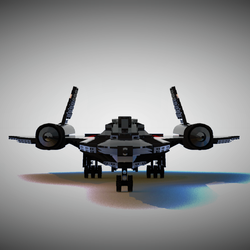 Thanks for checking out my latest project! This is my Imperial, 26 gun, triple masted, three decked, Ship of the Line, that I have dubbed the "Golden Eagle". This is my largest model that I have ever created, both in real life and digitally! The bottom gun deck is outfitted with 16 cannons, a prison located in the front of the ship, and a fully stocked kitchen in the rear. The middle deck is pierced for 10 guns and features an infirmary, carpenter’s storage, and a small mess hall. The top deck has 4 life boats, three masts and rigging, as well as a detailed captain’s quarters. There is also a detailed helm.

My model consists of 2958 pieces, and it was no easy task keeping it under 3000! I had to remove some details in order to keep it under the piece count, mostly in regards to the cannon. Instead of wheels under the gun carriages I had to fix them in place in order to keep the piece count down. I think that is a fair trade off though considering this model would be around 50 inches long if built with real pieces!!! It would include 33 minifigures. The admiral and his daughter, 3 naval officers, and 15 crew members. There is a force of 10 ground troops with a colonel (the one in the white hat), as well as a carpenter, a ships surgeon, and a cook. There are also two captured pirates being transported to the Imperial fort (coming soon!).

In the event of this becoming a real Lego set, official lego sails would be used instead of sails made from plates. I believe that my model would look great next to any period Lego ship. If you agree and if you like what you see and want to see more models like this, then please click that blue support button! Also, don't forget to follow and share it with all your friends! Thank you all in advance and brick on!

Don't forget to check out my other projects as well!

You can check them out here: https://ideas.lego.com/profile/LM71Blackbird/projects#search/s:most_recent