Nightmare Before Christmas and LEGO 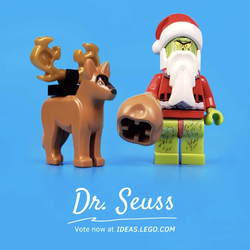 The Nightmare Before Christmas is one of the most iconic animated movies of all time!!!
Wouldn´t it be awesome to have it as a LEGO set?! Of course it would!
That´s why I have designed an original LEGO set that every fan, like me, would vote to make it a reality!
The set is based on 4 scenarios or key moments from the movies, in which I included as much details and moving parts as possible:
- The Graveyard
- Halloween Town
- Christmas Eve
- Oogie Boogie´s Lair
I also included some of the characters:
- Jack Skellington (with Santa´s clothes too)
- Zero (LEGO skunk + fabric body)
- The Mayor (with 2 faces)
- Sandy Claws in a bag (fabric)
- Oogie Boogie (with neon color, and could glow in the dark?)
- Barrel, Lock and Shock (with their own accessories)
I hope you like it! If you do, don´t forget to VOTE NOW, THANKS!!!