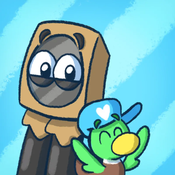 Undertale is an amazingly fascinating game with gameplay unlike most others, testing a player's morals by making each decision affect the game's outcome, dividing in good, bad, and neutral paths. The game took the world by storm and to this day is still incredibly popular, so it seems to me like a great subject to turn into a Lego set as fans could build and own a physical section of this beloved game.
I present to you the Undertale Ruins & Forest Set. A set portraying a small chunk of an early part of the game. We start off with a patch of golden flowers, where Frisk landed after their fall into the Ruins. We go on to train with a training dummy and then make it to the end of the ruins where we make one of the first major decisions in the game. After going through the exit door we meet up with Flowey, and hiding in the darkness is Chara waiting to see what decisions have been made. Once through the doors, we lastly find ourselves in the forest where we meet the "skelebros" Sans and Papyrus near a bridge with a(comically ineffective) protective fence.
In addition to the set, there's also a plate that recreates the screen seen during battles. You can place the character you're going against at the top and even adjust the amount of health in your health bar with the additional yellow and red pieces.
The entire set as of now consists of 411 pieces. There are 7 characters(5 mini-figures, a flower piece for Flowey, and the Training Dummy) as well as two items, Toriel's Butterscotch Cinnamon Pie and Chara's knife(if the knife is considered too violent in its implications it can be left out of the final product, it isn't necessary or the focal point of the set).