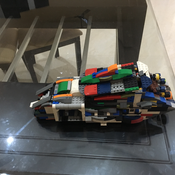 All aboard, Starboard crew!

This model is part of a new theme I'm working on, called Starboard. This theme is about a few minifigures who live in an apartment in the land of Brickwood. Seeking adventure, these minifigures travel through the Imaginative Spaces with their starfighter. One day, they type in coordinate 4564 and end up in the Lonely Space. This is inhabited by a tree named Treeroot, the oldest living thing in the Lego universe. There, they are given the map that leads to the Greatest Ship. Then, they make it their goal to find the Ship. Thus, the adventures of the Starboard crew begin with Anakin at the helm! They will recruit more minifigs. However, they aren't the only ones after the Ship.....

This model was made from a Lego set called Anakin's Starfighter. I took apart the model and rebuilt it using the pieces that came with the set(and some of my other pieces, too), and now it looks different. It comes with four minifigures: Anakin, R4, Kone, and Pilot. I'm using both Anakin's figure and name. R4 is the red astromech. I'm using both the figure and the name. However, I added 2 of my own minifigs, Kone(the guy dressed in black) and the Pilot(the guy with the visor).

Features: Comes with shaft which can open up to reveal a navigation/sleeping pod, also comes with landing gear

Note:This isn't the only model in the series. I'm building new ones.

Please support if you want to see more models in the series!