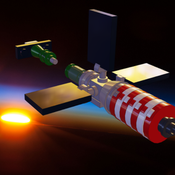 LEGO Model of one of America's most iconic spacecraft, The MERCURY REDSTONE MR-3.

(https://en.wikipedia.org/wiki/Project_Mercury)"Project Mercury was the first human spaceflight program of the United States, running from 1958 through 1963. An early highlight of the Space Race. its goal was to put a man into Earth orbit and return him safely, ideally before the Soviet Union. Taken over from the US Air Force by the newly created civilian space agency NASA, it conducted twenty unmanned developmental flights (some using animals), and six successful flights by astronauts. The program, which took its name from Roman Mythology, cost $1.8 billion adjusted for inflation. The astronauts were collectively known as the "Mercury Seven", and each spacecraft was given a name ending with a "7" by its pilot."

The idea for this idea came around when I saw my brother making a missile from LEGOs, the neck of it was made from a 4x4 cone and two 2x2 round plates... And immediately the Mercury capsule popped into mind. The rest of the rocket was an after thought that surfaced when I bought the LEGO Saturn V, and if this idea becomes a kit, it could become a nice side piece for the great kit.

I will post photos of a prototype kit as soon as money and time prevails! Stay Tuned...