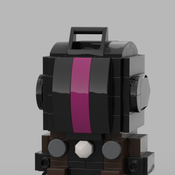 By Paxzbrix
21 comments
Six Toa for unity, the duty to protect the matoran and the destiny of Mata Nui
Whenever I think of Bionicle, two things instantly come to mind; childhood memories and the atmosphere of the theme itself.
The concept of tribal robots on a paradise island full of adventures and mistery, collecting lost masks and fighting evil was to me always so interesting and the core of Bionicle. That's what i wanted to capture with this model. But first I had to decide what the model should be. As original Bionicle figures can get quite large in size, they might not be the best decorative element for a smaller desk or a shelf and that's why I went with a more classic approach using minifigures and miniature builds. I quickly decided on Ga-Koro since it perfectly embodies the "robots in paradise" look with a floating village and a mask sculpture towering above it. But I also wanted to include all six original Toa but not just as extras to the model but rather as a part of it. In the end, I decided to add the great spirit robot, rising from the ocean.
The model is mainly a decorative piece, made to fit on workdesks or narrow shelves, designed to represent three iconic elements from Bionicle's first generation and is thus devided into three sections.
The first represents all six Toa Mata, standing atop of brick steps, as seen on one of the more iconic posters from 2001 and the sides of the stand were designed to look like the great Kini-nui temple. As mentioned prior, the model includes all six  Toa in minifigure form, completed with custom prints to represent each Toa. (Note: Minifigure headgear elements used for this model are mandalorian helmets because of how plain they are and are only placeholder. Minifigure prints will be in the next update.). Each toa also comes with their signature toa tool, with the exception of Pohatu, who has his signature rock. This segment is completed with a custom printed tile at the base of the stand that says "Toa Mata" in Bionicle's matoran alphabet.
Second segment of the model represents the iconic golden beach of Ga-Wahi  and matoran village Ga-Koro, with the statue of Gali's mask rising behind it. Some of the details also include the gates to Ga-Koro, dock with a boat and a stud to represent Takua. The base also includes a printed tile in matoran that says "Ga-Koro".
Third and final segment of the model depicts the "Mata Nui rising" scene with the great spirit robot, rising from the ocean. The model has 19 points of articulation, a technic brick in it's feet to connect to the stand and two display options; green eyes for Mata Nui and red eyes for Makuta, with an extra build for the mask of life, launching from the posessed robot.