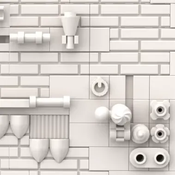 The Idea
Classic space observation buildings of the 19th century can be impressive constructions. Often having a large dome siting on the top of the building, forming a prominent landmark.
The design of this LEGO Ideas project is inspired by the old observatory building in the city of Leiden in the Netherlands. I was always fascinated by the building and the location of this observatory when I passed by the place. Once I started to find out a little more about the history searching the internet, I decided to suggest an idea’s project based on the building and the people that once did research there.
The most prominent one was probably the great scientist Albert Einstein. So the main character of this set is Albert E. (How awesome would it be to have such a smart minifigure in your build). But there were also quite some other great scientists doing research at the Old Observatory, which is because one of the sidewalls shows a wall painting of a rotating galaxy that can be found in close vicinity of the original Leiden Observatory honoring Jan Oort.
The Set Design
The Set is built from 2639 parts and the size of is approximately (W, L, H) 30 cm x 30 cm x 25 cm (12in x 12 in x 10 in)
The dome can be rotated, and the telescope inside can be tilted by turning the gear and crank at the back of the model. The hood around the dome is designed to open or close the slot opening for the telescope. The dome and the 3 roof sections are removable to access to the inside.
The backside remains open. Inside the build, some exhibition pieces can be found. A model type radio telescope, Einstein's chair and a model of a solar system is displayed to educate your minifigures about outer space. The exhibition pieces are built on 6 x 6 plates and are interchangeable, or maybe one can be replaced by a visitor from 21110 (She would be very welcome to tell about stellar constellations).
Why should this Idea become an official LEGO set?
The idea of an observatory draws links to LEGO themes like buildings and space. If you are a LEGO fan that is more into buildings, you will maybe like the idea of having a nice build with a new purpose to integrate in a LEGO landscaping project. As a Space enthusiast, you will maybe like the theme of space observation and science and, of course, an observatory allows to integrate some features of movable elements with LEGO technic. The combination of themes and some Easter egg's to explore are ingredients for a great LEGO set that the LEGO designers for sure can bring to another level.
What’s next
Next thing to do is collect all the parts and start making it a real build to show you the dome and telescope moving in a video. It would be great if you could share the same enthusiasm for this project and leave me your vote. Any feedback that you might want to leave also in the comments would be of high value to me.