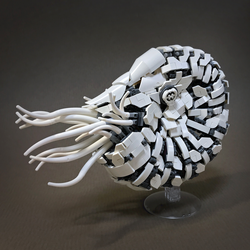 "Machine creature"
The distant future, the environment of the earth was harsh.
A highly developed AI has created a Mecha adapted to its natural environment.
The Mecha was designed with reference to living things.
From living creatures that have survived since ancient times, we can learn a lot.

Real "Ring-tailed lemur" is rare animal of Madagascar.
The appearance of the name seems to have a black circle in "tail".
Animals building a society centered on females.
There are a lot of injuries such as a flight kick while carrying a child.

Because I can move it freely, this model can decorate each part joint with a pose to like.
Even if there is not a stand, I can stand straight.