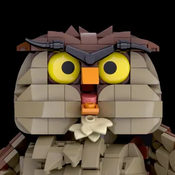 Hi, thank you for visiting my project, the Great Temple of Abu Simbel!
I've always been fascinated by history and culture of ancient Egypt, so I had no doubt on what my first project should have been.
Built by Ramesses II on the shore of Lake Nasser, the temple was a tribute to the greatness of the Pharaoh, and a celebration of his victory against Hittite in Kadesh (1274 b.C.).
This Lego project consists of 3000 pieces and measures 40 x 28.8 x 28.8 cm, with a pretty solid internal structure and many little details to build.
While the front of the set shows the temple itself with its 4 Ramesses colosses, I wanted to add also in the back something interesting to see. So I took inspiration from a bas-relief from inside the temple showing Ramesses firing arrows from his chariot, and made a tile version of it placed on the back of the temple. Under the bas-relief, we have 2 sliding doors beyond which you can see half of the first chamber, with the statues of (guess who?) Ramesses II, one for each column.
With the last update I added two altars with sarcophagi on the sides. Since fewer parts were needed than in the previous version, I decided to use the remaining pieces to improve the playability of the model, adding a couple of minifigures: King Ramesses II and his wife, Queen Nefertari.
The clothing of the minifigures is based on paintings found in the small Temple of Abu Simbel (built by Ramesses to honor Nefertari), and the Temple of Beit el-Wali in Nubia. Ramesses comes with Heqa and Nekhakha (royal scepters), Nefertari with the Sekhem (symbol of authority).
Thanks to the two sarcophagi, you can choose to display or hide the minifigures, leaving the discovery to other fellow adventurers!
And we all know there is no Egyptian temple without a secret, so I create a little puzzle to solve to find the treasure of Ramesses! With the lost Key you'll be able to open the secret chamber of the temple, full of gold and ancient artifacts!
(But please, don't tell the Pharaoh you found it!)
Hope you like and support the project!