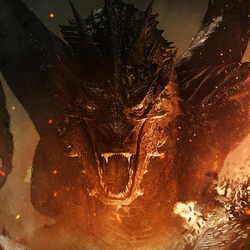 This set shows the scene in the Hobbit, "The Battle of the Five Armies" where Saruman, Lord Elrond and Lady Galadriel battle the evil wringwraiths and Sauron.

I think that this set would be a great addition to the great Dol Guldur sets that Lego has already given us. A Sauron mini-figure would also be a great bonus.

I used several different textured blocks to make the model as realistic as possible. Some of the fire pieces could be removed if they looked tacky.