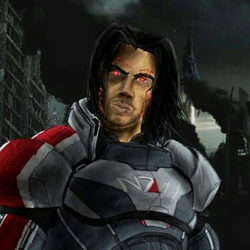 This is a USC of the Batmobile from the highly anticipated Batman V superman: Dawn of Justice.

When I saw the first images that where released by Zack Snyder, my first thought was " I wanna build that out of Lego". So I searched the web for any photos of the Dark Knight's ride, after a frustrating time I finally grabbed enough references that covered all the angles so I could confidently build it.

The main body color that i chose was metallic black because when i studied the images of the actual car, I noticed that body had a subtle grey tone to it, though I do not know how the metallic color in real life.

Building this so that it looked exactly like the reference was more difficult then I expected and at times was a bit frustrating for this was my first time using the Lego Digital Designer. It took me roughly 7 weeks to build this set and I believe that I really made it as accurately as possible with the pieces that were available and at it's current scale.