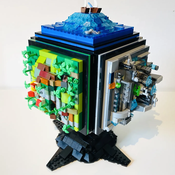 By Mr Legofan59
32 comments
Here is a version of the Solar System.
Indeed, the objective was to build the Sun and all planets until Neptune as Pluton has been not considered belonging anymore to our Solar System since August 2006.
It was also important to ease its transport so by building a support in three different pieces and with a color code for Lego technics.
Finally, to remember the planet ranking, I made a color code on the support to allow people what is the right ranking.
At the end, I really enjoyed this creation making develop some technics like how to make a globe with bricks, which is easier to do for smalls planets vs the Sun.
Hope you will like it.