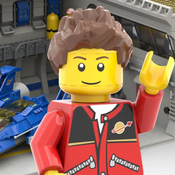 Looking down at the activity on the hangar deck, Base Commander Billy, a veteran from the earliest days of the Space Corp, watches as they put the finishing touches on what he hopes will be the fastest spaceship in the galaxy. He has assembled the brightest minds and engineers to create the X-942.
As the prototype preps for its first flight, its pilot Kara is eager to test out its capabilities. If everything works out, she’ll be entering the X-942 into the upcoming Jupiter 5000 spaceship race.
Up in the control room, Lieutenants Zack and Terra watch over everything.
Edwards tunes up new engine designs in the workshop.
The Space Police stand on guard, watching out for any spies or agents attempting to steal the X-942 designs or components.
Along with the hangar deck, the first level has a locker room for astronaut gear and a workshop with a prototype engine and tools.
The second level has a control room, the Base Commander’s office, and a catwalk overlooking the hangar deck.
The X-942 is a neoclassic design with variable position wings. During flight, the wings are down at a 45-degree angle. When the ship lands, the wings move up, parallel with the ground.
Why did you build it?
As a lifelong fan of the Classic Space theme, I wanted to pay homage to it. I originally designed the X-942 ship on its own, and then built the hangar set around it.
I wanted this to be the realization of the various space bases and ships I made when I was younger.
Why do you believe this would make a great LEGO set?
Classic Space has a strong following in the LEGO community. I believe this set would make a great addition to many collections.
The design not only incorporates elements of playability, but also makes a stunning and compelling display piece.
Beyond the X-942, the hangar design is a versatile setting for any other LEGO ship with similar dimensions.
Technical Details
The hangar fits on two baseplates, 32x32 and 16x32, to make a complete 48x32 area.
Height (not including antenna and dish): 17 bricks tall.
Approximate piece count: 1,560 pieces.