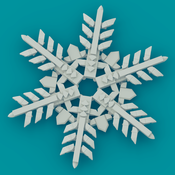 By Swiftfire211
188 comments
About the project
Dragons are by far my favorite mythological creatures, and also my favorite things to build from LEGO. I have three that I've designed myself and built from real LEGO, and I have a collection of many of the Ninjago dragons. It would be an absolute dream to be able to help design a real, official LEGO dragon set!
For this project, I decided to go with a sea dragon because of all the dragons I have, official or not, not a single one is a sea dragon. Additionally, I don't know of any official sea dragon sets (except for the old Brickley ones!), which is a shame because sea dragons have a lot of potential and variety that's fun to explore.
About the model
I created this dragon using 1300 pieces in a combination of teal and green for the main body to create a mottled, organic look, and a bright and contrasting orange and dark orange for the belly and fins, so they stand out. I used Bricklink's Studio program, because it gave me the freedom to use the colors I wanted to without restrictions; not all the pieces currently exist in the colors I wanted to use. Also, even though the model has a high piece count, 218 of those pieces are round quarter tiles used for the scale detailing, one of the parts of the design that I'm most proud of. It also features many points of articulation: each leg has three joints (shoulder/hip, elbow/knee, and wrist/ankle), the neck has three joints (the head, as well as the middle and base of the neck), the tail has six joints, the long body has two joints, the mouth can be opened and closed, and each individual part of the fins can be moved.
While I could have gone for a traditional sea monster look with fins instead of legs, I decided to go with a more amphibious look because I liked it better, and I thought it would look better on display. I imagine it as living in shallow water near tropical islands. Its thick, powerful tail allows it to swim at high speeds. Does it eat unsuspecting swimmers, or is it a benevolent protector who saves those about to drown? It's up to you!