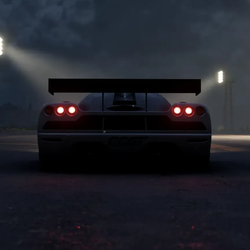 The Iconic Toyota AE86 Sprinter Trueno is a legend among car fanatics and is the dream car of any Japanese car enthusiast. This particular one that I have built is based on the AE86 that appears in the popular manga and anime series Initial D.
I built this car because there is a lack of Japanese cars in Lego. This car in any form would be a perfect addition because it along with the Mazda RX-7 FD3S are both Japanese legends. This build has many features included as well, such as working pop ups, opening doors and an opening hood. I am aware that some things on this aren't perfect, such as the interior being grey on this model yet it is a maroon-brown in the series, or the engine isn't amazingly detailed. One thing that I particularly despise is the fact that I did not have enough black wheel arches to do the back wheels like I did the front wheels with the arches. I did build this on my computer exactly (and I mean exactly piece by piece!) the way I did physically, and when I build physically I have a limited selection of parts.
I do plan on doing an RX-7 FD3S digitally as I do not have the parts to make a physical one.
I hope viewers enjoy this build, as it took 3 days of trial and error to complete. I would also love to hear your thoughts in the comments section. Make sure to check out my other submissions!
P.S. I rendered the images with Stud.io for those out there that do not know how to. This software is free and so is the rendering feature that comes with it.
32
39
days left