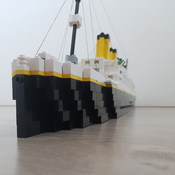 By CrazyHistorian
32 comments
LEGO Titanic with Captain Smith minifigure. I've build this Titanic because I am a great fan of history and especially the Titanic. I think this build would be fun to have/build and I would like this to become a LEGO set. The LEGO ship is 80 centimeters (31,5 inches) my build has leaning chimneys and masts. it has a flag at the back and lights (not working) on both sides of the bridge. it has almost 4 meters of thin rope. and the entire ship contains of 2 parts: upper part (black hull and above) this sticks out of the water and the red part that is under the water, would it be sailing. it has one paper/plastic flag of the company that made the original Titanic on the forward mast.
-
Titanic, build in Belfast, went on it's first trip from Southhampton to New York when it halfway struck an iceberg and sunk of which 1522 passengers died due to not enough lifeboats on the ship as it was said to be "unsinkable".