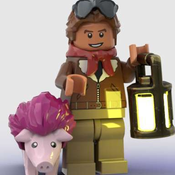 By BrickerBeard
311 comments
Dear Friends,
I have always been passionate about flying and reproducing aircraft with the use of unbeatable bricks.
For this reason I chose to reproduce this reconnaissance plane known for its impressive speed skills. Built during the Cold War, it got new life thanks to NASA using it for suborbital supersonic flight tests (in its last flight before retirement it flew from the West Coast to the East Coast which are 3870 km away in less than an hour and ten minutes )
My goal was to build an aircraft that was as faithful as possible to the original while maintaining the comparative dimensions of the minifigures that fit comfortably in the cockpit.
the result was a project of important dimensions and with clean and sharp lines as in the original model.
I am satisfied to have built a very stable and visually striking object given the generous dimensions.
The minifigures chosen represent the pilot Ed Schneider and the navigator Marta Bohn-Meyer.
This is the version sold to NASA for supersonic suborbital flight tests.
Composed of 1650 pieces measures approximately 100x50 studs