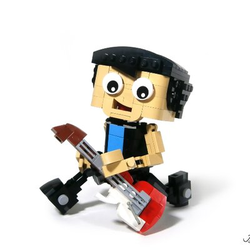 Since there now is a LEGO minifigure with Donald Duck, wouldn't it be great with a set of his car, also called "the 313"? This model is 6 studs wide so it fits great in a LEGO city.

The car made its first appearence in the movie "Don Donald" from 1937, and in 1938 it was introduced in the newspaper comics by Al Taliaferro. The design is originally based on an "American Bantam 1938"-car, but has changed slightly over the years and varies from different cartoonists.

Its name "The 313" comes from the license plate that has number 313, which also is the day when Donald Duck was born (13th of March).