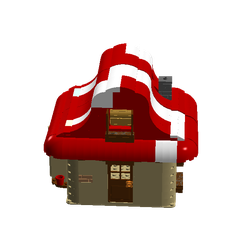 The Incredibile is Mr. Incredible's car from the movie The Incredibles. I built this model on Lego Digital Designer the day I saw Incredibles 2 in theaters. Minifigure-scale cars are my favorite things to build out of Legos and I hope you find this accurate to the two Incredibles films.

This model of the Incredibile accomodates two figures; one in the passenger seat and the other in the driver's seat. I also have included two minifigures: Mr. Incredibile (in regular clothing from Incredibles 2), and Frozone (see additional pictures). If this became an authentic Lego set, it would also be nice to get Mr. Incredible in his original, classic super suit. In addition to the minifigures, I have also included a few accesories such as the remote for the Incredibile (an unprinted two-by-two tile), and an ice piece for Frozone's hand.

Please support this project! Because of the many fans of Lego cars and The Incredibles, the Incredibile would make a fantastic set. Thank you for viewing this project and have an incredible day!