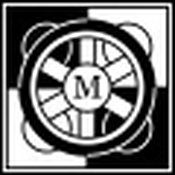 Build a railroad empire of steam.

The "Super Mega Steam Power Train Builder" sets you up to GO BIG right out of the box with an express main line 4-6-4 configured steam locomotive, a baggage car, and a 1st/2nd class passenger car. Need a change of pace? Use the same modular elements, and in a snap, you can rebuild the set into a small branch line 0-6-0 locomotive with a gondola and passenger car or several other variant builds. With the "Super Mega Steam Power Train Builder", there's plenty of pieces and inspiration to build your own unique models, as well.

Moving along: You can push it, Power Functions it, or retro it with a 9v electric metal rail train motor. It's upgradable, retrograde-able, and ultimately UP TO YOU, how you will run YOUR railway.

Add another "Super Mega Steam Power Train Builder" set and build a different consist for a variety locomotives and cars to roll along each other side by side. Keep adding, keep building, keep configuring, keep running.

My inspiration for this production derives from over 30 years of LEGO(R) system trains. Particularly, this set rekindles the trains on offer from in the early 1980s using some up-to-date LEGO elements and colors. Back in the year 1980, the LEGO steam locomotive set 7750 (http://brickset.com/sets/7750-1) and the mail van car 7820 (http://brickset.com/sets/7820-1/Mail-Van) rode those first gray-era plastic rails. Beautiful sets in the day; inspiring sets for today.

Perhaps your nostalgia and love of LEGO trains will put this "Super Mega Steam Power Train Builder" project into production for you and a next generation of LEGO Train builders.

Thank you. Aloha and mahalo,