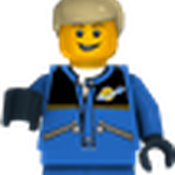 This proposed Lego set of the United Launch Alliance Delta IV 5-meter Rocket Fleet is intended to be a 4-in-1 set, allowing the builder to create four distinct variants of the Delta IV rocket, one at a time.
The Delta IV rocket family has been flying since 2002, and in 2016 four of the five configurations launched payloads into orbit.

A representative satellite payload is included and features blue solar panels and gold antennas and satellite dish.  The satellite model fits inside the payload fairing of the M+(5,2), M+(5,4), and Heavy configurations.  On the EFT-1 mission, the Orion Multi-Purpose Crew Vehicle (MPCV) and Launch Abort System (LAS) was the payload, rather than a conventional satellite.

The long white tube on the side of the 1st stage is the LOX feedline which carries the liquid oxygen propellant from the first stage LOX tank down to the RS-68A engines.

The part count is just under 250, but may increase a little if interior support pieces are added to make the rocket more “playable”.

The set makes an impressive desk model, with the M+(5,2) and M+(5,4) models standing approximately 16 ¾ inches tall, and the Delta IV Heavy configuration standing just over 18 inches tall!  The set is also educational as it shows how the real Delta IV rocket goes together with the upper stage rocket and satellite model fitting inside, and can be reconfigured for different missions by adding additional solid rocket motors or cores to create the Heavy configuration.

Thanks for viewing this Lego IDEAS project submission.  I hope you enjoyed it enough to earn a vote, and also share with other Lego and Space enthusiasts! It’s easy to share on Facebook and Google+, or by tweeting about it on Twitter using the links under the “Support” and “Follow” buttons on this IDEAS project page.

Thank you for your support! Happy building.