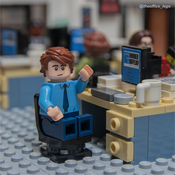 "Whenever I'm about to do something, I think, 'Would an idiot do that?' And if they would, I do not do that thing."

This LEGO Ideas project is based on the hit-comedy TV show The Office, which aired from 2005-2013. As I watched the show over and over again, I began to wonder what it would be like to recreate the actual film set in LEGO form. Back in the fall of 2015, I decided to create a new LDD file and just experiment with the design of it. I originally had no intent on actually purchasing the pieces to build it, let alone submit it to LEGO Ideas. Well, over two years later here we are. Countless hours spent designing and tweaking every little detail, along with placing special orders that would take weeks to arrive. I'm excited to finally get to share this with you, and I hope you enjoy it as much as I do!

I wanted to make this set as accurate as possible, so every little detail was important to me. The overall dimensions of this layout measure just a little over 17”x19”. In other words, this is no small-scale set, which gave me much more freedom to add the small details and make it as authentic as I could, within reasonable measures. The total piece count comes in at just under 2,500 pieces (the exact number will come in a later update). Another great feature of this set is found within the structure itself. I designed it with the ability to split apart into 3 sections (see photos above). This makes transporting the set much easier, as well as getting those clean, close-up shots with a larger camera. Although the set is geared more towards adults/young adults, playability was definitely kept in mind as well. The bottom of this set is reinforced to ensure great structure, and the modular aspect of it makes playability much more inviting.

A total of 14 minifigures are currently included with this set. Although I wanted to create every character from The Office, I chose the main characters that were consistently featured throughout the entirety of the show on the primary set (i.e. characters like Toby and Kelly aren’t featured YET because their desks reside in the annex). I do, however, have plans to add a couple more characters within the next few months. Below is a list of each character and the accessories that are included with them.

I’m very excited to finally be able to share this awesome set with you, and your support is greatly appreciated!