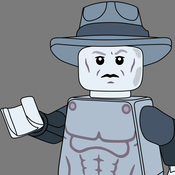 By Cal398
34 comments
Howdy’ hay ho New Passenger! Welcome aboard on supporting my project! As creator of this Train Car I will be “conducting” a little tour so you can get caught up on every little detail! Directly inspired from the show “Infinity Train”, the build represents one of the countless cars the Train has.
It is fully equipped and decorated so it looks almost exactly to the original, with a few minor sweeps which weren't possible to recreate, but anyway. This set also includes 3 car interiors, each of them corresponding to the 4 seasons of the show. Now you might ask yourself, how can there only be 3, and I will tell you how! One particular interior is both mainly present in Season 2 as well as in Season 3, so fear not, for everything is in order. The total piece count is 2869 pieces. Both of the walls are easily removable to give better access and view inside. Train Cars:
-Book 1 The Crystal Car
-Book 2 and 3 The Mall/ The Apex Car
-Book 4 The Amogus Car/The Astro Queue Car
Each interior is built in such way, so it is as close as possible to what is shown in the series. They all come with a Door way, and even if it might not be fully visible, you can observe an Exit Door, colored in translucent green, in the Apex Car.
Side note: I am well aware that “The Amogus Car” is not the actual name, but it reminds me of Among Us so it still counts!
UPDATE NO. 1: Besides these amazing interiors, there’s also the huge octopus-like robot named The Steward, along with One-One. I made sure to build her (or is it him?) as accurate as they come. It has 12 fully movable tentacles, 4 of them displaying bigger claws to be able to grab things more efficiently. If you have a sharp eye, you may have noticed The Steward is holding two Lego Torsos, which are the uniforms of Ryan and Min which you can see in the first slide of my project showcase.
I also, updated Ryan's and Min’s clothes to match more with what we see in Book 4 and also slightly re-printed Grace and Simon's figures. Of course, they have their accessories, Ryan with his Red Guitar and Min with his little but very functional Stylophone. UPDATE NO. 2: The fun is not over yet! Newly included are Samantha The Cat, Randall who represents all water present in the Train and Hazel's mother and friend figure, Tuba, the purple gorilla. Randall is composed out of blue-transparent parts, with a smiley face print. Tuba has moveable arms and legs , with full 360° articulation and of course she's equipped with 2 gold trumpets to help make her “ROAAR” more powerful and scary.
All these characters along with the Steward are meant for playing and having fun, rather then display. Moving on, we have 8 figures in total, plus, a stand to be able to show all of them. The figures emulate the protagonists of each season and come packed with their trusty companions.
Minifigures:
Book 1:
- Tulip Olsen
- One-One, a happy/gloomy robot
- Atticus, a talking Corgi dog
Book 2:
- Lake/ MT
- Jesse Cosay
- Alan Dracula, a magic deer
Book 3:
- Grace
- Simon
- Hazel
Book 4:
- Ryan Akagi
- Min-Gi
- Kez, a talking bell Notes:
Even if this set is meant for display, younger kids can play safely with it. I tried my best to add a few builds and characters to be used for entertainment purposes specially (for ex. The Steward and Tuba). I designed the build so the whole car is compact and not easy to take apart, the wheels can each spin independently of one another.
I first got the idea and motivation to hop on the project a few months ago when I watched the 3 Seasons of Infinity Train, and with the fourth Season already out, as well the popularity of the series increasing daily, I thought it would be the perfect time to bring this idea to life. I put a lot of effort in the whole build and I truly hope that more people support it so that it can one day become a real Lego Set.
Until next time,
Your conductor One-One
And
The creator, Vlad