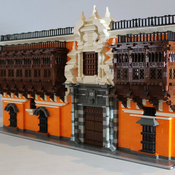 My name is Aldrin, and for many years I liked to build buildings, especially replicas of some of my country, Peru.

Since I no longer had much space to store my MOCs, I decided to change the buildings by trains and boats.

This is how this Huascar MOC was born, which took me a few months to perfect and shape it.

I sincerely hope, you like my first project in LEGO Ideas.

The "Huáscar" was built by Lairds Brothers in England in 1865 and served for the Perú´s Navy.

This ship was an ironclad of great versatility and very light, which gave it an advantage over the heavy wooden boats of the time.

He had as captain a great admiral, Miguel Grau, who was known for his chivalry and heroism around the world.

The Huascar had a brilliant participation in the war of the Pacific (1879-1884) where he put in check to the rival army.

Finally it was captured in the Battle of Angamos, dying most of the tripulation, including its heroic almirant.

Actually the ship is a floating museum, and still is posible feel its heroic history inside.

My lego version of this ship has around 2990 pieces.

It was very challenging to shape the body of the ship.

The interior is hollow and offers the possibility of customizing it according to the taste of each one.

It includes some minifigures of people visiting the ship, and also one representing the legendary admiral and a sailor welcoming tourists.

This project could become an official Lego set if it reaches 10,000 votes. Voting is easy, free and without any obligation, you just have to press the blue button "Support". If you do not have an account on LEGO Ideas, you must register, you will receive an email to activate your account and then you can already vote. Also you can help a lot by sharing the idea in Facebook and Twitter with your friends and invite them to vote.

Thank you very much for support this project.