Bazooka Jack and the Cybug Attack 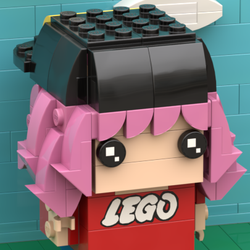 On a dust covered moon somewhere in the Andromeda galaxy, space station Osirion is under attack by mutant cybernetic alien wildlife! Help Bazooka Jack and his rag-tag team of scientist/adventurers fend off the savage Cybugs with their make-shift weapons. Once that's over, they can take a much-deserved break from the action, or explore the mysterious grey wasteland that is Sogroth.

Make scrambled eggs with Nueso Haern, or take a trip with Lilith Clover in her moon buggy. Collect samples of alien wildlife with the Grabber Mech, or get your soda stuck in the vending machine. The entire space station is modular, so you can rearrange it to suit your aesthetic tastes or even combine it with other sets, such as 6868-1 Hulk's Helicarrier Breakout!

Bazooka Jack and the Cybug Attack is a tribute to planetary romance creators such as Edgar Rice Burroughs (Barsoom), Frank Herbert (Dune), and George Lucas (Star Wars), who popularized the genre by creating brilliant, vibrant worlds that have captured the hearts and minds of a generation. Planetary romance is a subgenre of science fiction characterized by adventures on extraterrestrial worlds. But also, it is my personal response to the LEGO Space themes' habit of making extraterrestrial species the villains. Why can't there ever be any non-human heroes? Well now there are.