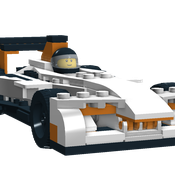 Formula E is an open wheel motorsport category in which all cars are powered by electricity. It visits world renowned cities such as Hong Kong, Paris and New York, and races through challenging city centre circuits which leave no room for error. As well as producing exciting and close racing, Formula E puts the fans first; for example it has a system called FanBoost which allows fans to vote for their favourite drivers, with the top 3 receiving a temporary boost in power which they can use to help gain or defend positions during the race. Now, to bring fans even closer they can build their own Minifig scale Formula E car of their favourite teams and drivers, recreating the fun filled action and excitement seen at each race. These models are designed to fit in with the existing Speed Champions products.

If you could 'FanBoost' this project by giving your support, it would be greatly appreciated; even more so if you could share the project via Twitter, Facebook, or Google+ in the links under the support/follow buttons. In order to get this project considered by the Lego Group we will need 10,000 supporters to reach the evaluation stage. For more info, click "How it works" in the menu at the top.

Each Formula E team must use the same chassis, the Spark SRT-01E, but they are permitted to develop their own powertrains. The other aspect of the car unique to each team is the livery, and the teams pride themselves on having some of the most vibrant and eye-catching liveries seen in modern motorsport. Each car in this set is 142 bricks approximately. Here are the three featured:

There are 10 teams in total and you can see models made for each of them in the Lego Digital Designer screenshot above. All cars will also include sponsor stickers for authenticity.

I am considering adding other accessories/set pieces such as a FanBoost board (Much like the one on the FE website which tracks driver's positions during the FanBoost voting) and a garage awning with mechanics/personnel helping a driver to do a car swap. (Each driver uses two cars per race in order to make the full distance) I will try and add these in updates later on.

​Thanks for taking the time to check out my product; if successful we can drive the future together...We just need to build it first though.