Once Upon A Brick 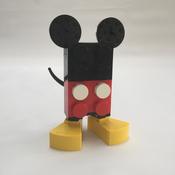 The humble 2x4 LEGO Brick and the magic of Disney come together in this project, which I call 'Once Upon A Brick'.

The project sees classic Disney characters reimagined as LEGO 2x4 Bricks, whilst still retaining the individual characteristics that make them so beloved and well known, the world over.

When it came to choosing which Disney characters to use for this project, the possibilities were somewhat daunting. After all, there are a wealth of classic Disney characters I could have picked from, based on the companies' 90-year history. However, it only took me a second to realise that there really was no choice at all; it HAD to be Mickey Mouse and his friends, Donald Duck, Goofy and Pluto. The history of Disney was built around these characters and they were an obvious starting point for me.

Averaging 110 LEGO bricks per model and with each standing approximately 13cm tall, I feel that this project is the perfect fit for LEGO Ideas and I hope that you feel the same.

I have lots of other ideas for characters to expand the 'Once Upon A Brick' theme and I will be updating the project with new builds as I complete them. This not only gives you, the potential supporter, more examples of how the concept works, but will also give LEGO Ideas more choice, should this project succeed in reaching the target 10,000 supporters required to move through to the review stage.