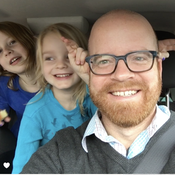 By NokomisRob
77 comments
This is an expandable LEGO solar farm with:
375 pieces
Expandable: multiple sets can be snapped together to build larger projects
Goal: 10,000 Votes
If 10,000 people with a free LEGO Ideas account vote for this idea, LEGO will consider making it a real-world kit!
The Fun Future and LEGO Solar Farm
Solar farms, also called solar parks, are increasingly common worldwide and a lot more will be built over the next several years. LEGO has a wind turbine kit, modern home with rooftop solar kit, and several LEGO spaces kits with solar panels.
My kids and I built the International Space station kit shortly after it was introduced in February 2020, then bunkered down in the spring to watch (and occasionally re-watch) LEGO Masters. Watching Aaron and Christian win the first episode had us hooked. Then, handing all 112 solar panel pieces in the Space Station kit, it was hard to stop thinking about what a LEGO Solar Farm kit should look like.
We spent a morning building and texted some images to a friend. When she texted back a photo of a LEGO solar farm her kids had built (without us previously talking about this!), it seemed like something that was ready for LEGO Ideas.
Design Decisions
Here in Minnesota, USA, most solar farms use a diverse mix of deep-rooted grasses and flowering plants under and around the panels. Some solar projects pair the flowering vegetation with honey bee hives outside the fence and the largest ones graze the vegetation with flocks of sheep.
With funding from the U.S. Department of Energy, scientists at the National Renewable Energy Laboratory, Argonne National Laboratory, and a growing number of universities are researching solar farm designs.
For LEGO Solar Farm, I aimed for something with <400 pieces so that IF it were to become a real world kit, it would both be affordable to a large number of families and could easily fit on a desk or office coffee table.
Good with Specs & Sharing Ideas, Learning with LEGO
I'm not an accomplished LEGO builder, but I'm friends with scientists, engineers, entomologists, beekeepers, and grazers. I really geeked out with them all a few summers back while doing research for this talk, now TED.com. I'm grateful for their input in early versions of the model.
Reviewing the LEGO Ideas guidelines it was clear that collaborations are a-ok and my (awesome) build partner decided to assign the rights to me and stay out of the limelight because of his day job. I'm also grateful to Amanda Feuk of TwinLUG for her help getting sample kits together to promote this submission. Long-time friend and collaborator Arlene Birt created the beautiful graphics to help this submission stand out.