The Metropolitan: Don’t Miss Your Train! 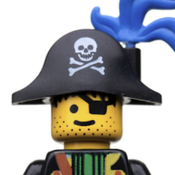 By LilBilly
242 comments
Here is my LEGO Ideas project which represents the Paris metro and more particularly the Pasteur station of Line 6.
I have lived in Paris for several years now, and I have always been fascinated by its Metro built over 100 years ago. He is like the blood system of this city, visionary and still perfectly adapted to the needs of the inhabitants of Paris. In addition to the incredible technical challenge that its construction was with the means of the time, its designers added to its purely practical role a real aesthetic intention which is found in the realization of its exterior entrances, its emblematic tiling and its mosaics. All this which makes the Paris Metro recognizable among all the metros of the major capitals of the world.

I chose line 6 because it is my favorite line!
It opened in 1909 in its current configuration. Of the 14 lines present in Paris, it is the only one to cross the Seine twice, on two impressive aqueducts, one of which offers one of the most beautiful views of the Eiffel Tower. Its course is mainly aerial which makes it almost unique. And to finish it crosses right through the whole south of Paris which is the part in which I lived and still live, and which is my favorite part of the capital.
The rolling stock for this line consists of MP 73 trains dating from 1974. In my eyes, they retain an authentic visual aspect that still resembles the very first metros of the time.
These are trains on tires which allows the trains to be able to perform very rapid accelerations and deceleration between the 28 stations which are on average spaced just 500 meters apart.
This LEGO project represents the Pasteur station, one of the stations that has kept its period decorations.
I wanted to represent this set a bit like a slice of cake that would be extracted from the ground and would allow us to see how these works are laid out under the Parisian soil, sometimes just a meter or two from the surface.
We discover its typical entrance in the Art Nouveau style of Hector Guimard. This takes us to the small underground corridors with their gates to validate our ticket, which then leads directly to the station platforms.
The train arrives on time from its dark tunnel!

"Attention à la marche en descendant du train!,
Please mind the gap between the train and the platform!,
Cuidado con el espacio entre el vagón y el andén!"
I hope this LEGO set will appeal to all metro, train and station enthusiasts. For adults and children alike.
The superb decorations present were made by my talented girlfriend @Ouistiti🐿﻿, I love them and I hope the LEGO community will also like them!
(All her works are used with her entire permission).
Thank you for your support everyone!