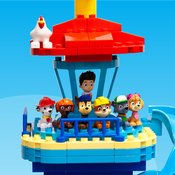 My 3 year old daughter and I have hours of fun playing with Duplo. I always loved Lego as a kid and it gives me great joy and pleasure to play with it for a second time with my daughter.
My daughters favourite TV program is Paw Patrol, so I made her the Paw Patrol Lookout Tower out of Duplo.
I had the idea for this set about two years ago, and it started to come to life once I realised we had enough pieces to make something that resembled the Lookout Tower.
I often build my daughter something after she goes to bed, then in the morning she  usually knocks down what I’ve built! The Paw Patrol Tower is one of the few builds that has remained standing, and she has enjoyed getting involved taking the tower from the first concept to the final concept shown here.  She does have a genuine toy Lookout Tower but prefers to play with the Lego version I created, so I think it gets her seal of approval and should count as the 1st vote!
If you have never heard of Paw Patrol it is a popular preschool tv cartoon in its seventh series. The main characters include Ten-year old Ryder and his team of rescue pups; Marshall, Zuma, Chase, Rubble, Rocky, Sky, Everest, Tracker, Rex and Robo Dog who take on missions to save Adventure Bay from accidents, disasters and the actions of the mischievous Mayor Humdinger.  At the start of each mission the team assemble at the Lookout Tower.
https://adventures-of-the-paw-patrol-2.fandom.com/wiki/The_Lookout
Notes about the set
At the moment my daughter is only playing with Duplo, but I envision it would work well as both a Duplo set and a 4+ range.
To create the set and keep brick count down Lego would ideally need to reintroduce some older brick moulds that are currently out of stock.
I believe a Lego Paw Patrol collaboration would be a fantastic licence.
1. Paw Patrol sits in the 2-6 age range. A Duplo and 4+ Lego range would be a perfect fit for the two brands and because of the age demographic, it makes a good transition for kids to go from Duplo to Lego.
2. It’s gender neutral so appeals to a wide audience.
3. With seven series and three movies Paw Patrol has an established following. With a theme to each series, each new series includes revamped vehicles and new characters which offers great commercial and merchandising opportunities.
4. It would also provide an opportunity to expand Legoland / Duplo Valley with Paw Patrol themed rides.
I hope you all like the design we think is Pawsome! I welcome all your comments, feedback and votes.
Thank you for taking the time to read and view this project.
Kind regards
LegoDadLabassi