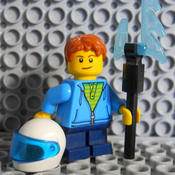 Welcome to my idea for a LEGO set. The space mission concept includes a base, three vehicles, and some other minibuilds that add to the play experience.
The ExoNova missons launched in 2061, Hyperaccelerating to a frigid glacier planet named Avorann, with a semihabitable atmosphere where humans wouldn't survive without an oxygen filter over their mouths. three astronaughts and two cosmonaughts were deployed in a CUBE base that would inflate.
There are three vehicles that come with the set. The Tracked Transport is the main ground vehicle, which features a snow melter to burn through snow drifts and a cargo space that can carry a drone or a crate. The Snowmobile is for scouting and collecting Ice bamboo sprouts, and features a small cargo area, a tool rack, and space for one minifigure. The Scout Craft is for reconnaisance and searching for downed drones in the mountains.
The two drones, the smaller one CHIRPIN, and the larger one DOUG, each help to farm the Ice bamboo, and carry cargo.
A solar array and a Sattelite dish are set up beyond the base, and need frequent maintnence due to wild wind storms. The crate contains spare parts for the sattelite dish in the pictures, but you can also take pieces from the solar array for more play opportunities.
The base's first floor features a small greenhouse, Airlock, kitchen area where you can cook the Ice Bamboo to make it edible, a small computer to contact the Exonaughts on the planet surface, and a water filtration system. The ladder leads up to the second floor, where there is a small desk area, cactus garden, bunk beds and a terrarium for Fibby, the alien frog that was found on the planet. The final level is a Star dome, with room for one minifigure, and some telescopic controls to focus the giant dome lense.
There are five minifigures in the set, a male Meteorologist (brown hair), a male Mechanic (black hair), a female Biologist and cook (long ponytail), Another male Mechanic (blond hair), and a female Botanist (orange hair). A Maintenence robot, and a cat figure are also included.
I hope you like this set, and that you will support. My goal is to get as many supporters as possible. I am definitely open to any suggestions you may have. Please share this with your friends if you want it to become a real LEGO set! Thank you!                 -Legospacekid