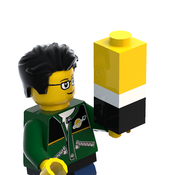 SÃO PAULO is the largest city and the financial heart of Brazil. This Brazilian megalopolis has about 12 million inhabitants, numerous emblematic buildings and some of them were chosen to represent the city in this 778 parts model:

Ibirapuera Park: representing the green areas of the city, the Ibirapuera Park has 390 acres of green area and gardens designed by Otávio Augusto Teixeira Mendes and Roberto Burle Marx. The park also houses an architectural complex, here represented by the Oca, designed by Oscar Niemeyer, and the Obelisk.
Museum of Art of São Paulo (MASP): representing the city museums, the MASP, one of the most important cultural institutions of Brazil, founded by Assis Chateaubriand and transferred in 1968 to a building designed by Lina Bo Bardi, it is located on Paulista Avenue, which here represents city streets and avenues.
Altino Arantes Building: representing the commercial buildings of the city, this 161 meters hight building is the 3rd highest skyscraper in the city, the 7th highest in Brazil, and offers an amazing view of the city’s landscape. Inspired by the art deco architectural style of the Empire State Building, this is one of the most emblematic buildings in the city of São Paulo and has been considered as a historical heritage of the city since 2011.
Municipal Theater of São Paulo: representing the cultural scenery of the city, the Municipal Theater of São Paulo is one of the most important theaters in Brazil and one of city´s postcards. Ispired by the Paris Opera House, this luxurious building designed by Ramos de Azevedo, Cláudio Rossi and Domiziano Rossi combines Renaissance, Baroque and Art Nouveau styles. Famous for housing important shows and artistic movements, it has received renowned artists and celebrities from Brazil and all around the world such as Heitor Villa-Lobos, Mikhail Baryshnikov, Maria Callas among many others. By its side, there is a Statue of Antônio Carlos Gomes, author of the opera entitled O Guarani.
Anhangabaú Valley: representing public squares and open spaces. Located between Tea Viaduct and Santa Ifigênia Viaduct, in a busy central area of the city, the Anhangabaú Valley is one of the most emblematic public spaces in Brazil, where important events are held such as public demonstrations, political rallies, presentations and popular shows.
Copan Building: representing the city’s residential buildings, this colossal curving structure of 115 meters hight homes nearly 5.000 residents  and it is a symbol of the Brazilian modern architecture. Designed by Oscar Niemeyer in 1966, for a lot of people  it is the first building that comes to mind when thinking about São Paulo architecture.
I believe this would be a great LEGO set because it would represent, with a nice design, an important world megalopolis, adding to its importance the fact that it would be the first Brazilian city built as an architecture-style LEGO set.
I hope you like!   Thank you very much for your support!