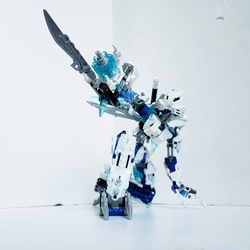 Story:
This figure is based on the theme Bionicle in both generations (with the mentioning of a Toa of light in Journey to One) including his planned appearance for the Lego movie 2. He is a brave warrior from the original bionicle series gen 1 who once was a traveller and chronicler on a distant island. Going through many adventures and diving through action wherever he went till he became the seventh Toa, The Toa of Light. Ever since his coming as Toa he has defeated Makuta and has since traveled through countless dimensions. Visiting worlds one could only dream. So let this lone Toa hero open a portal into your life as he takes you to adventures unknown.

Reason for making it:
This character was an absolute favorite of mine growing up so I wanted to capture all the fun i had when i was younger with this figure. With twin staffs like in the Stars variant and an overal design that reflects his previous iterations as a Toa.
Features:
Is hyper articulated with ab crunch and waist rotation to boot. And has a arm swinging function that makes him seem to come alive when activated in a dynamic manner.
Video:
20
13
days left