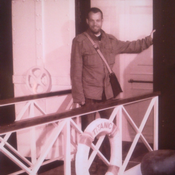 This project is inspired by my 5 year old son and the many hours we spend together building with LEGO. He loves cars, trains and ships, loves reading about them before bedtime, looking at pictures - and he loves building with LEGO. One of his favourite trains is the magnificent 'Mallard', so I decided to give it a go.

'The Mallard' 4-6-2 built at Doncaster Works, England in 1938 is one of the most iconic trains ever built, and it holds the world record as the fastest steam train with a topspeed of 126 mph (203 km/h). With its streamlined and aerodynamic design it is an instant eyecatcher and it would make a great LEGO set.

A retro-build for sure, build with whatever bricks we had, but as a project idea it could easily be modernized with newer elements and also electrified. However, the 4-6-2 wheel arrangement as it is here is perfectly capable of managing the sharp turns of the LEGO railway, so no crutches needed there. I submit this alongside my other project, the RMS Titanic.

My son believes this got the better chance:-) We'll see!