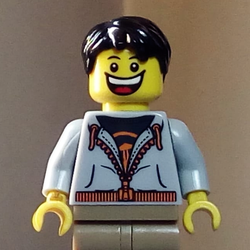 Welcome to the neighborhood of chavo.

This project is in honor to Mr. Roberto Gómez Bolaños, the creator of the series "El Chavo del 8".

This set of "Neighborhood of Chavo" is based on the famous Mexican series "El chavo del 8", created by Roberto Gomez Bolaños (Chespirito), whose episodes remains on TV until now. 30 years ago the first episode was released with great success among all the ages in several countries like Colombia, Venezuela, Argentina, Peru, Chile, United States, Spain, Japan and others.

The "Neighborhood of Chavo contains details such as the famous barrel where the main character, El Chavo, hides when he gets into trouble, the wall where Quico cry, among other details.

This set also brings to the main characters of the series: El Chavo, Chilindrina, Mr. Ramon, Quico, Mrs. Florinda, Professor Girafales, Mrs. Clotilde (The Witch of the 71), Mr. Barriga, Ñoño, Jaimito the Postman and Also includes another famous character that appeared in a special episode of the Chavo, is the "Chapulin colorado".

This will be a successful lego set for adults who grew up watching the show daily, as well as children who were influenced by these same adults who fell in love with this comedy series.

I hope you like it very much and thank you for your support.