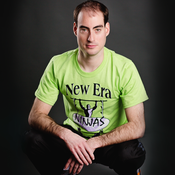 Build it, display it, role-play, and compete on some of the toughest Lego obstacles in the Lego world with the American Ninja Warrior National Finals set.

This set is built on a 16x16 Lego plate featuring all eight American Ninja Warrior obstacles.  Obstacles in this set are the Snake Run, Propeller Bar, Double Dipper, Jumping Spider, Parkour Run, Warped Wall, Domino Pipes, and Flying Squirrel.  The course ends by climbing the cargo net to the top and hitting that buzzer before the clock runs out.

The Bleacher seats slide in and out when you want to add or change your audience. You can fit up to nine standing fans.  On the Announcer’s Station the lights move up and down and all other white/blue lights spin or rotate.  The angles change on all of the trampolines and Snake Run.  One of the steps spins 360 degrees.  All eight obstacles are fully functional with your mini figure.  The giant television behind the cargo net comes with two course clocks.  One clock reads 25 seconds and the other reads 10 seconds as you’re running out of time.  I showed what both look like in the pictures even though you can only have one at a time.

The most fun special feature is the buzzer.  It lights up when you or your minifigure’s hand applies slight downward pressure on a small brick light.

I have a personal connection to this set as Drew Drechsel trains me on ninja warrior obstacles like these.  I have been building American Ninja Warrior obstacles out of Lego since 2015 so that children and adults can experience the obstacles in a fun, and less scary way.  This set creates the kind of buzz real life ninjas feel when they hit their buzzer at the end of the course.

LEGO, if this gets the votes needed for review, I will supply a LDD file or a file in any other form required.  I am open to you changing aspects of the design or title to suit your needs along with choosing the number or type of minifigures included in this set.

I need just 10,000 votes to make this Lego set a hopeful to make it into your homes and hearts.  Thank you for your support.