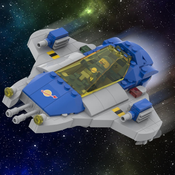 Calling all Star Pilots!!
Explore the stars and join the ranks of pilots everywhere clamoring for a ride in the Nimble-One!  Keep the peace in an ever-expanding galaxy with this fast, short-range exploration vessel.  The Nimble-One is the clear choice for Space fans everywhere with it's classically-inspired design.
Designed to be part of a larger flight squadron, the Nimble-One features a modular chassis construction which allows each pilot to customize its various components to make it their own.  Alone, it's truly a nimble ship, acting as a scout and threat aversion craft.  As part of a squadron the Nimble-One becomes an unbeatable force, quickly dispelling adversaries and protecting galactic citizens everywhere.  A compact design allows the Nimble-One to land on its nearby carrier ship (or backpack pockets) for long-range missions.
Retracting landing gear and detailed cockpit controls help bring the Nimble One to life.  With over 200 parts each pilot can put their own finishing touches on their Nimble-One.  Whether exploring, patrolling, or (groan) escort missions, this ship is ready for every adventure you can imagine.  Added accessories include a drop tank, drone launcher, and sensor rocket.
This fun, swooshable design that holds up to cascading meteor shows (and being dropped off the dining room table), Benny would surely approve!
Secure YOUR Nimble-One by voting for it on LEGO Ideas!