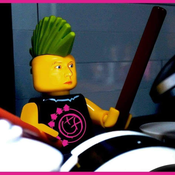 By Vincent Brassard
20 comments
Here comes < The Shipwreck Survivor > project. Starring a handy castaway Minifigure. Using material found on the wreck and around him, he managed to build his shelter and had to fish to survive awaiting rescue. The scene has been built on two levels to give more perspective to the story. Our handy man used a part of the boat sail to create a door, the upper part of the mast as a cooking spit, and other remaining material to build the retractable roof and the dock. The highlight of this project is the fish bank swimming around the rocks held by a mechanism actioned by a handle, made with a ship part. This way the fishes come around closer to the fishing hook. My set also offers some accessories like a fishing rod, a skillet, a mushroom, a waterlily with a frog, binoculars, an oyster, a bird, a boat and many fishes.
The original idea came from the fact that I wanted to build a two level structure and use my rocks to do so. I come from a Canadian city where fishing is really popular and I love doing creations based on my reality. At start, it was a fixed shark and there was no mechanism, But by searching my block bins I found this mechanism that was there, ready to make something turn. I decided to put some time on the project and send it to Lego Ideas. Rest assured, I never was a castaway, but I often fished on an island and cooked meals on a campfire before spending a night in a hut. I really think ''The Shipwreck Survivor'' would be a great set for Lego and its fans, not just because of its two level build (less common) but also because of the fun you can have understanding and building a mechanism that also supports the upper part of the structure.
In addition to bringing a new genre, it is filled with adventure. Whether it is to play with or simply expose it, the interest of building this set is definitely there. It also has a great visual appeal. This set is full of history and possibilities, as is includes a lot of premium parts that collectors like me love to have around. It could be used either by the simple set builder or people that are looking for more complex concepts, which makes it a good product for adults or kids. In the end, I am dying to know why fans fell in love with this set!