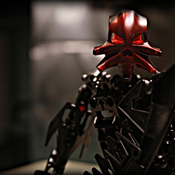 Junkbot was a flash game created by gameLab for the LEGO Group as one of many games for their website Lego.com. Junkbot was released in 2001 and its sequel, Junkbot Undercover, was released in 2003. These were puzzle games and the player had to move the colorful bricks around to help the titled character Junkbot get to the trashcans safely so that he could eat them. Together, the Junkbot games were on Lego.com for about a decade before they were removed. Still, they were a favorite among the games on Lego.com and is still remembered by those who reminisce about their days playing on that website.

Sadly, for fans of Junkbot such as myself, he never existed in an official, physical Lego form. Sure, we could easily build him, but without the printing, it just wasn't truly Junkbot. That's why I've created this project. To not only finally have Junkbot in a true physical form, but for the entirety of the game to come to reality.

How Big Is This Project?

As I said, this project has the entirety of the Junkbot games. But what does that mean exactly? Well, Junkbot was separated into four buildings, each with fifteen levels. Junkbot Undercover had four floors with fifteen levels too and an extra fifth floor with only one level. Including the two intro screens of the games, since they were interactive, that's 123 different levels. And I have built to scale all 123 levels, including all the platforms, move-able bricks, hazards, enemies, etc. that are in these levels.

Now if you played Junkbot or you looked at the massive gallery of photos, you're probably wondering how this set will contain all 123 levels. Surely, it would be way too massive for each level to be all out at once? And yes, I agree, that wouldn't be practical. So, this set will be similar to a Creator 3-in-1, having the minimum amount of pieces so that you can only have one of the levels out at a time. Instead of a 3-in-1 however, it's a 123-in-1.

So, how many pieces are in this set then? I don't have an exact number, but I estimate that the piece count is anywhere from 800-1,200 pieces. That's a large number of parts, for sure, but this is well under the 3,000 piece limit.

How Accurate Are the Models to the Real Levels?

Obviously, these models aren't perfectly accurate to the real levels in Junkbot. Such as the backgrounds being completely grey, or perhaps the menu side of the screen not lining up properly with the rest of the level, etc. Mainly because it would take way too many pieces to have everything accurate to the levels and this project already uses enough pieces as it is. However, I did build them to scale, using the in-game bricks as a measuring rod. Or at least built them to scale as best I could. As I found out, some platforms in the game don't exist as a Lego piece. Such as a Technic Brick that is 1 by 3 with two peg holes.

Still, if you would like to compare my brick built version of the levels with the real levels from Junkbot, I will be putting screen shots of the levels in the update. There are a couple up there with the other pictures, but I didn't want to make the gallery too massive.

Ah, so you did catch that. Yes, Junkbot does have Minifigure legs. Even though the leg piece and a 2 by 2 brick fit perfectly fine in real life, LDD wouldn't allow the two pieces to connect. So I went with the next best thing I could do for my LDD models and used regular bricks for the purpose of showing what Junkbot looks like in the levels.

In the Update, I will have a picture of these two pieces connected to show that it can be done.

What's the Play Value of This Set?

Admittedly, this is the weak area of my project. This set is more of a collector's set; for those that love Junkbot. Anyone can still play the levels, move Junkbot and the other bots around, etc. Though the game doesn't translate into a physical set form. So, I see the true play value coming from building and creating your own levels, or kids making their own stories with the characters and pieces in this set. Kind of like the current LEGO Classics line. Or again, trying to act out how the actual level went.