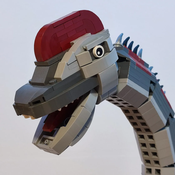 Like many I am passionate about the Middle Ages, the heroic fantasy and therefore inevitably, as a fan of LEGO, the line LEGO Castle.

Everyone loves castles and knights. And lot of people build great LEGO castles. But any King needs an opponent to his size to challenge him.

And it is always more difficult to make the "bad guys" attractive, to give them a real identity, to make them attractive.

What better way to make them dinosaur riders, handling gunpowder ? With the "Trolls's Assault Triceratops", reverse the balance of power. It is both (very) heavy cavalry and siege engine, the triceratops and his crew will defeat any opponent.

The Assault Triceratops is an autonomous unit, carrying with it all the food, consumables and equipment needed to fight.

Alone or in group he can face any enemy, counting on his heavy protections, his main cannon and crossbows allowing him to defend himself against any directions.

The ferocity of the triceratops and his crew also allows him to be a formidable melee unit.

If you like this LEGO product idea, do not hesitate to support it and give your suggestions in the comments section. And maybe we will soon be storming a fortress at the controls of a horde of dinosaurs !

This LEGO set is created as a totally independent model. Nevertheless, I have published two other product ideas that work perfectly with this one, I invite you to discover them and to support them if you wish.