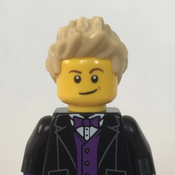 Welcome to the both playable and displayable Modular Miniature City!
This set consists of reconfigurable roads, canals, train tracks and buildings that allow you to create your very own miniature city! Not only does this make for a great display piece, it is also playable: Cars can drive on the roads, boats can navigate through the canals and even the train follows the tracks from one station to the next!

Each component has Technic holes on its sides by which it can be connected to other components with the help of Technic pins. This means that the city is completely modular and that there are endless possibilities to reconfigure and create unique cities!

One of the main features of the miniature city is possibly the smallest functional railroad system created with LEGO! A passenger train can follow the train tracks around the city. This is made possible by inserting minifigures' hand pieces into the bottom of the train cars, that exactly fit into the grille pieces used as train tracks.
The city is populated with all necessary buildings and features a city needs, such as: In order to access the buildings and features of the city, the set includes many infrastructural components:

The infrastructure can be used by a variety of vehicles, such as: In short, the Modular Miniature City would be a set that is fun for both young builders and older LEGO fans. The modularity and features of the set allows it to be played with or displayed in many new ways, and could entertain LEGO fans all around the world, one day with your support!
Thank you for taking a look at my ideas model and for supporting this project!