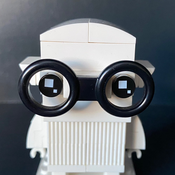 By GodofLego
21 comments
BrickHeadz Pop would not be complete without the introduction of the renowned singer Freddie Mercury.
Throughout the past 4 decades, he has continued to wow fans with his ability to capture an audience.
Famously known for singing Bohemian Rhapsody with Queen, his enigmatic style has influenced pop throughout the years.
Freddie's style is distinguished. I have attempted to capture this showing him in his white leotard and bright yellow jacket blasting out his vocals into the mic.
BrickHeadz is such a great platform for creativity and I love the minimalistic possibilities that can be created with just a few bricks. With the help of the team and LEGO and the support of fans across the world it would be fabulous to bring Freddie into the spotlight again.
An opportunity to explore great branding with a pop megastar.
Let's all go gaga and let the LEGO rock world go round with this as an iconic BrickHeadz!.