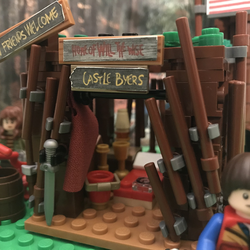 FoBoJoBoShow
56
258
days left
The cake is a lie! Here's our Portal 2 LEGO set complete with all the characters! Enjoy! This is a Portal 2 GLaDOS Test Chamber design. The idea is to have a single set but one that can be modified. Much in the same way as the LEGO Minecraft series, where there is one layout in the instructions but certain parts of the set can be moved around. This allows the builder to create their own test chamber. The portals are on open plates that can easily stand upright anywhere. Most of the structures are on 2x2 modified plates with a center open stud so they can be easily moved around. Special features include: detachable and replaceable portals, a working elevator with crank (I used string from a LEGO Crazy Action Contraptions book/set), a working launch pad, and a movable GLaDOS with detachable head. I also included Wheatley, Space Core, and a Cave Johnson Core that can be attached to GLaDOS' body. Special thanks my son, Finn, the complete inspiration for this project idea! We love playing this game! You can check out our video of the build here:
56
258
days left