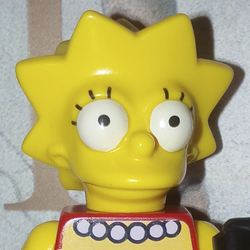 I build this model because I love Michelangelo’s sculpture, rational and emotional at the same time. I imagined Michelangelo at work in the yard of the cathedral workshop, near Duomo in Florence. I reproduced the workshop (which now no longer exists), the ancient work tools and machineries, a big scaffolding; in a corner a little place to come up and relax or study. I wanted to depict the first chisel blows, the first roughing of the marble. I try to respect the real proportions man-statue and to depict with a few bricks the statue’s classic pose.

Technical description.  The statue turns on itself at 360°. The scaffolding moves on wheels along a track. Through the arch openings you can see the view of the city: the Giotto’s Bell Tower and the Brunelleschi’s Dome. They are built as the scenography of a theater, rotating on a pin, so you can put them up or down as you want. The figure on the balustrade rotates at 180°.

5 Mini figures: The young Michelangelo at work on scaffolding (only 26 years old, but with grey hair and clothes because of marble dust!). Michelangelo studying and drawing the project. The artist Giorgio Vasari reading as a narrating character (he wrote Michelangelo’s biography). Two assistants.

Curiosity.  On the wall behind the statue I reproduced the original artist’s signature.

Art history (just a little) Michelangelo was asked by the Duomo’s Workshop to complete an unfinished project begun 40 years earlier: a colossal statue of Carrara marble portraying David to be placed on the gable of Florence Cathedral. Documents showed the Workshop was determined to find an artist who could take this large piece of marble and turn it into a finished work of art. They ordered the block of stone, which they called The Giant, "raised on its feet" so that a master experienced in this kind of work might examine it and express an opinion. Though Leonardo da Vinci and others were consulted, it was Michelangelo who convinced everyone that he deserved the commission. Michelangelo worked in a courtyard of Duomo’s Workshop and used a huge block of marble that two artists had previously chipped away, at before deciding that it was unsuitable for sculpture; so the block remained neglected for thirty years, all the while exposed to the elements in the yard. He would work on the massive statue for more than two years and he completed it in 1504. A team of consultants, including Botticelli and Leonardo da Vinci, was called together to decide upon its placement, ultimately Piazza della Signoria. It now stands in the Academia, while a replica occupies its place. Just the colossal size of the statue impressed Michelangelo's contemporaries, 5.17 m / 17.0 ft (including basement) and it became a symbol of freedom, courage and intelligence which triumph over brute force.

The pose of Michelangelo's David is unlike that of earlier Renaissance depictions of David. For example the bronze statue by Donatello represented the hero standing victorious over the head of Goliath. Michelangelo instead, for the first time ever, chooses to depict David before his battle. He looks tense and ready: the artist catches him at the apex of his concentration. His left hand holds a sling that is draped over his shoulder and down to his right hand, which holds a rock. The twist of his body effectively conveys to the viewer the feeling that he is in motion. The figure stands with one leg holding its full weight and the other leg forward. This classic pose causes the figure’s hips and shoulders to rest at opposing angles, giving a slight s-curve to the entire torso. It is known from archive documents that M. worked at the statue in utmost secret, hiding his masterpiece in the making. Since he worked in the open courtyard, when it rained he worked soaked. Maybe from this he got his inspiration for his method of work: it is said he created a wax model of his design, and submerged it in water. As he worked, he would let the level of the water drop and, using different chisels, sculpted what he could see emerging. It is said during his work he rarely ate and slept sporadically, and when he did, he slept with his clothes and even in his boots still on.

Thanks for watching. Support my love for art and bricks. If you like my work, say to your friends to support this project. It is good for show, but it also has a great playability. It’s a model for all, young and old. It should also have a low price. Bye, see you soon!

If you want to support my other projects too, click on Magic Party in the Funny House and The Secret of the Temple