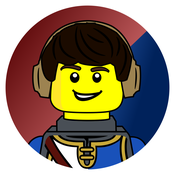 The Game Box is designed to give you something to do in any situation. Packed with five amazing games in one, boredom isn't an option! It is extremely portable, compact, and yet full of fun! The Game Box is perfect for that car trip you're planning, taking to a friend's house, or just hanging out with your family. Consisting of less than 1000 parts, it is easily affordable as well.

To play, simply pull out the lock, open the doors and choose one of the interchangeable game options! Slide out the one you want, switch it with the one on top, and close the doors. The board will be locked in place, and the top of the walls will keep pieces on the board. The pieces are also handily attached using studs, making it good for even bumpy road trips.

The Box also makes a great display model and conversation piece. You can also build and customize your own interchangeable game boards using the simple system!

Chess – A two-player strategy board game played on a checkered gameboard with 64 squares arranged in an 8x8 grid. It is derived from a 7th century Indian game called chaturanga.

Checkers – Another two-player strategy game, it is played on the same board as Chess.Two players compete to capture all their opponent's pieces.

Ludo – A strategy board game for two to four players, in which the players race their four tokens from start to finish according to the rolls of a single die. Also known as Parcheesi or Sorry, it originates from the Indian game Pachisi.

Snakes and Ladders – An ancient Indian board game regarded today as a worldwide classic. It involves two or more players who race their tokens from the bottom of the board to the top, taking shortcuts called “ladders” and fallbacks called “snakes.”

Tic Tac Toe – A simple two-player strategy game. The player who succeeds in placing three of their marks in a horizontal, vertical, or diagonal row wins the game.

This model was created entirely using MECABRICKS, a powerful online Digital Lego Design software, and rendered using Blender. A big thanks to Sleepy17 for the "Game Box" custom decoration!

Please click the support button if you'd like to see Lego make this a set! Leave a comment if you have any feedback or ideas, I'd love to hear what you think and will be glad to update the project.